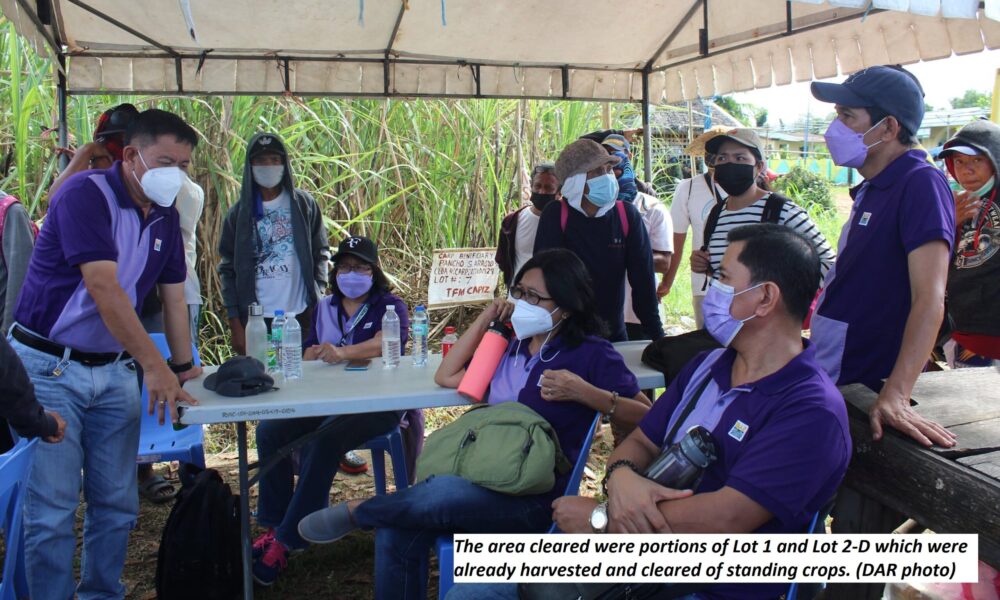 The Department of Agrarian Reform (DAR) in the province of Capiz, in coordination with the Philippine National Police (PNP) and the Armed Forces of the Philippines (AFP), stayed consistent with its mission as it provided assistance to the 175 agrarian reform beneficiaries (ARBs) to take actual physical possession of the DAR-awarded lands formerly owned by Nemesio Tan.

The Nemesio Tan estate is covered under the Comprehensive Agrarian Reform Program (CARP) located in barangay Culilang, President Roxas, Capiz, and barangay of Dulangan and San Sebastian, Capiz with a total land area of 188.08 hectares.

Regional Director Sheila Enciso said the 175 farmer-beneficiaries of the Nemesio Tan property were installed on May 11, 2021. However, due to the strong resistance of Ferdinand Bacanto, who claimed to be the former landowner’s administrator, and the presence of standing crops, the installed ARBs were deprived of their rights to actually and physically possess their landholdings.

Enciso noted that prior to the conduct of the activity, the DAR municipal office identified the lots that were already harvested, cleared of standing crops, and ready for ratooning.

“On the last week of November, the concerned ARBs, including members of their immediate households voluntarily helped in the clearing activities,” Enciso said.

She said that the area cleared were portions of Lot 1 and Lot 2-D in  Brgy. Culilang, President Roxas, and both lots were already harvested and cleared of standing crops.

Enciso disclosed that they also put demarcation strings as markings of their awarded lands considering that concrete monuments installed by the DAR surveyors are already missing.

“It is rightful and timely for the ARBs to take possession and cultivate their awarded lands taking into consideration their safety and security as the utmost priority,” Enciso said.

She said that it is the duty of the department to implement agrarian reform and that the awarded lands should be enjoyed by the ARBs.

Enciso added that the collaborative efforts of the DAR, ARBs, PNP, and AFP have made the activity a successful one.

Assistant Regional Director Lucrecia Taberna said that DAR is persistent towards exercising the rightful ownership of the farmer-beneficiaries to actually possess and cultivate the lands awarded to them but the primary consideration should be the value of life.

‘’There is no question about the political will of the officials and employees of the DAR in the implementation of our program, but we must secure the safety and security of all with the help of AFP and PNP’’, Taberna said.

Taberna explained that some powerful landowners have the means to harass DAR personnel and the ARBs.

Provincial Agrarian Reform Program Officer II Anthony P. Arostique was very thankful for the assistance of the PNP and AFP in the implementation of the programs of the DAR.

‘’With the presence of the PNP, and AFP, we are assured of the genuine implementation of the program,” Arostique said.

ARB leader Pancho Arroyo expressed his gratitude to the DAR, AFP, and PNP for providing them security and uplifting their lives.

‘I am very thankful for the continuous support of DAR, PNP and AFP. Without their help we will not be able to reach this milestone to cultivate our land and uplift our lives,” Arroyo said.

After twenty-four (24) years of fighting for their rights, Pancho Arroyo and the rest of the ARBs of the Nemesio Tan Estate will be able to cultivate the DAR-awarded lands and be able to elevate the quality of their lives. (DAR)