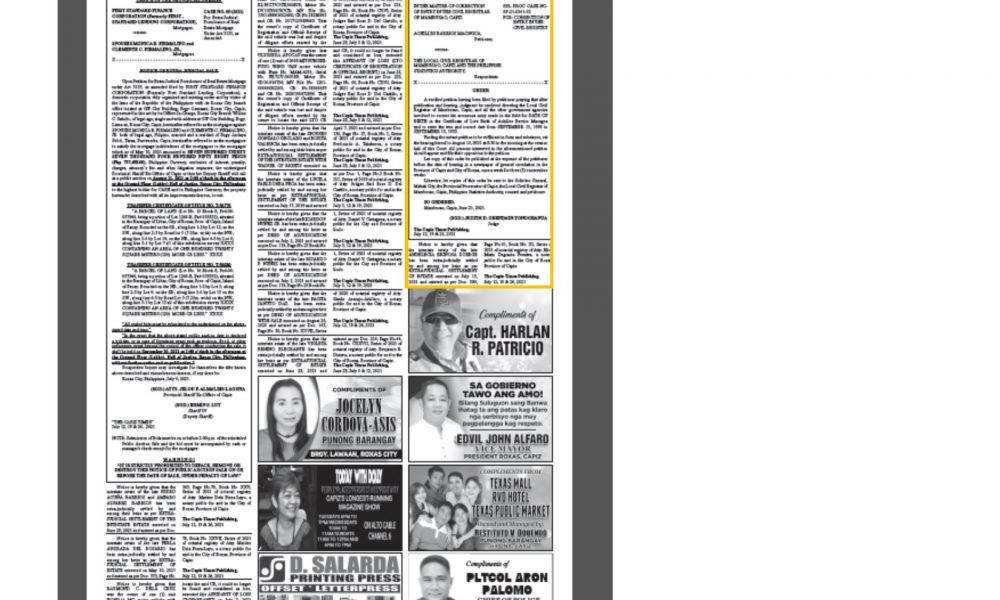 IN THE MATTER OF CORRECTION
OF ENTRY IN THE CIVIL REGISTRAR
OF MAMBUSAO, CAPIZ
ACHILLES BARRIOS MAONGCA,
Petitioner,

THE LOCAL CIVIL REGISTRAR OF
MAMBUSAO, CAPIZ AND THE PHILIPPINE
STATISTICS AUTHORITY,
Respondents.

A verified petition having been fi led by petitioner praying that after publication and hearing, judgment be rendered directing the Local Civil Registrar of Mambusao, Capiz, and all the other government agencies involved to correct the erroneous entry made in the field for DATE OF BIRTH in the Certificate of Live Birth of Achilles Barrios Maongca and to enter the true and correct date from SEPTEMBER 15, 1996 to SEPTEMBER 15, 1955.

Finding the instant petition to be sufficient in form and substance, set the hearing hereof to August 10, 2021 at 8:30 in the morning at the session hall of this Court. All persons interested in the aforementioned petition should appear and file their opposition to the petition.

Let copy of this order be published at the expense of the petitioner before the date of hearing in a newspaper of general circulation in the Province of Capiz and City of Roxas, once a week for three (3) consecutive weeks.

Likewise, let copies of this order be sent to the Solicitor General, Makati City, the Provincial Prosecutor of Capiz, the Local Civil Registrar of Mambusao, Capiz, Philippine Statistics Authority, counsel and petitioner.