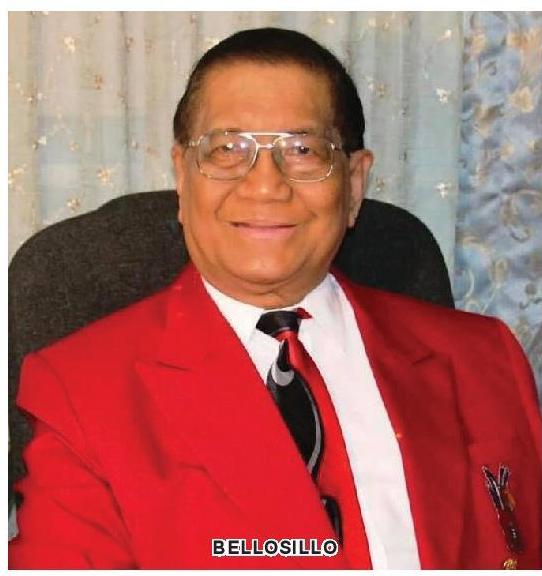 Adolfo B. Bellosillo, MD, FACC, FSGC, FPCC, FPCP, FPCCP, FPSE, graduated from the University of the Philippines with a degree in Medicine. He completed his fellowship training in Cardiology from the University of Iowa in Iowa City and his fellowship training in Cardiac Rehabilitation from Emory University in Atlanta, Georgia. He is the Founder and President of the Foundation for Lay Education on Heart Diseases (FLEHD). He also held the position of President for the following professional organizations: Philippine Heart Association/Philippine College of Cardiology 1990-1991, Philippine Society of Echocardiography 1992-1994, Cardiac Rehabilitation Society of the Philippines 1994-1999, and the 7th World Congress of Cardiac Rehabilitation and Secondary Prevention from 1996-2000.

Dr. Bellosillo has written and published nine books: Remembering and Looking Forward (13 years of public service by the Foundation for Lay Education on Heart Diseases, Inc.), Cardiac Rehabilitation: Adding life to years and years to life, Learning Preventive Cardiology Through Music and Poetry, Stories the Heart Sounds Tell, Knowing, Avoiding and Surviving a Heart Attack, When the Heart Fails, Exercise Stress Testing the Heart, How to Remain Young at Heart: A Musical. The Heart in the Elderly will be released soon. A tenth book, The Heart in Women, is in the works.

What is the Foundation for Lay Education on Heart Diseases (FLEHD) all about?

While enjoying some relaxing days in New York in late 1998, I had plenty of time to think about what we as physicians might have neglected in the management of cardiovascular diseases. Prevention is definitely the better approach to decreasing cardiovascular mortality and morbidity. And the success of prevention can only be maximized through education. This prompted me to create a foundation to address the matter of educating the Filipino community in regard to heart diseases. FLEHD was formally launched on February 22, 2000 at the 7th World Congress of Cardiac Rehabilitation and Secondary Prevention held at the Philippine International Convention Center. A Board of Trustees was formed to govern the activities of the foundation.

Recognizing the advantages of collaborating with government agencies to facilitate the Foundation’s activities, FLEHD partnered withthe Department of Health, the Department of Education and the Department of Interior and Local Government. These partnerships were sealed with the signing of a Memorandum of Agreement on July 30, 2001. The Foundation has grown over the years and has logged 496 educational outreach activities since 2000.

What is the role of the FLEHD chapters in the provinces including the Capiz Chapter?

We formed the chapters to effectively reach out to the Filipino population in the provinces outside of Metro Manila. There are currently 25 chapters in the country.

What is the core curriculum of FLEHD public forums?

1. Know your heart and how it works.

2. How do I know I am having a heart attack?

3. The risk factors for atherosclerosis.

4. Cholesterol: the good, the bad and the ugly.

6. Smoke gets in your heart.

8. Sex and the heart: fact and fiction.

We published a primer on Coronary Artery Disease which contains most of the pieces of information lectured during forums, seminars, assemblies, etc. by the faculty of the Foundation and were distributed to Barangay health workers. The primer has been translated into the following dialects: Tagalog, Ilongo, Cebuano, Ilocano, Pangalatok, and Pampangueño.

All FLEHD activities are conducted for free.

How can an ordinary citizen attend one of these seminars or public forums?

Usually the seminars are arranged by interested civic organizations and groups. Occasionally, FLEHD sends out invitations and notices.

How does FLEHD reach out to senior citizens who are most vulnerable to cardiac disease?

The Filipino population is getting older. Hypertension and coronary artery disease are among the health problems encountered by those over the age of 65. Our seminar for senior citizens includes the core curriculum discussed at public forums. It also addresses the proper medications for treatment of hypertension and coronary heart disease. Other topics discussed at the seminar include diabetes, obesity, alternative forms of management for significant artery obstruction and helping the male cardiac patient witherectile dysfunction.

How to Remain Young at Heart, A Musical Drama has been well received by the public. Why is the musical an effective tool in teaching the prevention of heart disease? How often is the musical presented?

Knowing full well how much Filipinos love music and the need to keep our audience wide awake through half-day and full-day sessions, I attempted to teach about heart disease through music. At the 2006 FLEHD annual convention, I premiered my song, Haw Haw Hee, which teaches awareness of the risk factors of heart disease and how to control them.

The musical grew from the compilation of songs introduced at the lectures over the years. Jeremiah Calisang from the University of the Philippines composed and arranged the music while I wrote the lyrics and libretto. The first provincial performance was presented at Colegio de la Purisima Concepcion (CPC) auditorium in Roxas City in October 2007. The show was preceded by a whole day seminar on Preventive Cardiology for public school teachers in the city.

How to Remain Young at Heart is about a 36 year-old executive who is rushed to Makati Medical Center where he dies from an acute heart attack. He leaves behind a wife and three children. The musical traces his life and lifestyle that led to his early demise. When the musical was performed in October 2008 at the Carlos P. Romulo Auditorium, RCBC Plaza in Makati, it received rave reviews. In 2019, it was presented eight times in various cities throughout the Philippines including a performance at CPC College Assurance Plan in Roxas City. How to Remain Young at Heart has been translated from English to Italian, Ilonggo, Cebuano, Chabacano, Bicolano and Ilokano. In 2011, the cast of the musical traveled to Tuscany, Italy where they performed the play in the Italian language.

What are the risk factors of coronary artery disease that we should be aware of?

At what age should healthy heart awareness be made available to our youth? Should this be taken up by the school system?

Since offsprings born to women subjected to physical, emotional and gustatory abuses during the time of fetal development have been shown to have higher incidence of premature atherosclerosis and diabetes, awareness should start early in life to forestall rapid progression of the disease and development of serious complications. Awareness could be facilitated through public education. If Preventive Cardiology can be included in the school curriculum, this will be a tremendous help.

What do you miss most during this pandemic?

My special interest in life is teaching. And I have been very much involved in the training of interns, medical residents, cardiovascular fellows and my colleagues in the medical profession, especially those in cardiology. However, with the onset of the pandemic, all face-to-face activities have ceased for the moment. I wish I could still go on with my involvement in the international lecture circuit. But the ravages of time and the pandemic negate this.

(About the author: Charie Albar is a travel writer and lifestyle blogger. She is the founder of Balay ni Charie Foundation, a grassroots organization that gives school supplies to the children in Capiz. She divides her time between Capiz and California. You can read her stories here: travelswithcharie.com.)

Conversation with a Capizeño is a series of interviews with Capizeños who are making a difference in their community.