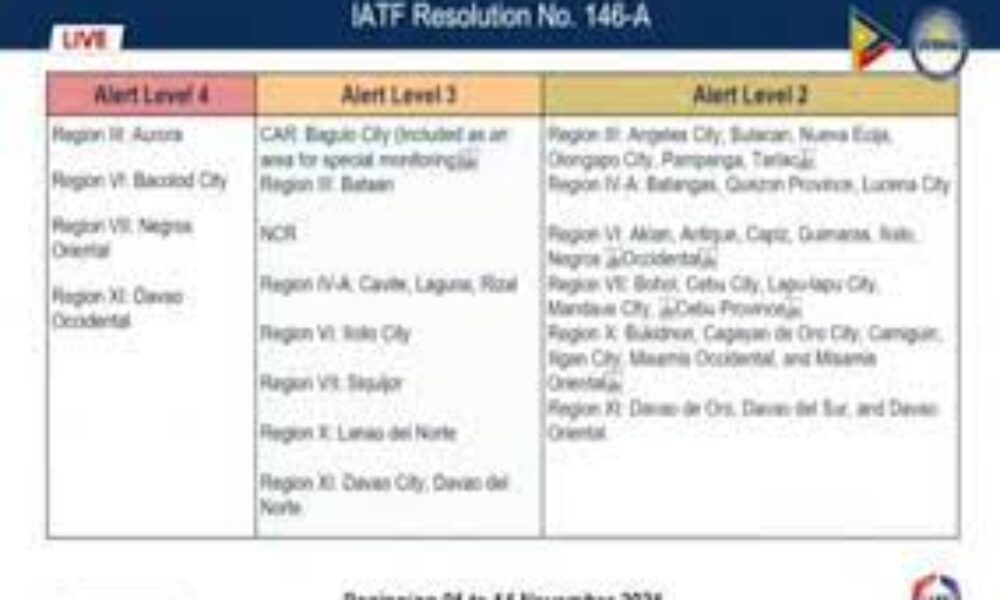 At least 25 provinces and cities outside Metro Manila have been added to the roster of areas that will be placed under new alert levels from November 1 to 14, Malacañang announced on October 29.

This, after the Inter-Agency Task Force for the Management of Emerging Infectious Diseases (IATF-EID) approved Thursday the recommendation to further expand the pilot implementation of the Alert Levels System (ALS) to Central Luzon, Western Visayas, and Northern Mindanao, Presidential Spokesperson Harry Roque said.

Roque said Baguio City will be placed under Alert Level 3 but will be deemed as “an area for special monitoring”.

Originally, only 14 provinces and five cities joined Metro Manila in the pilot implementation of ALS from Oct. 20 to 31.

Meantime, the IATF-EID also approved the new quarantine levels in the country for the month of November, Roque said.

Roque said Mountain Province, Catanduanes, and Zamboanga City will be under the more stringent modified enhanced community quarantine (MECQ) from November 1 to 15.

The general community quarantine (GCQ) status “with heightened restrictions will be implemented in Abra, Cagayan, Isabela, City of Santiago, Nueva Vizcaya, and Quirino for the whole month of November, Roque said.

“All other areas not mentioned shall be placed under modified general community quarantine (MGCQ) for the whole month of November 2021,” he added.