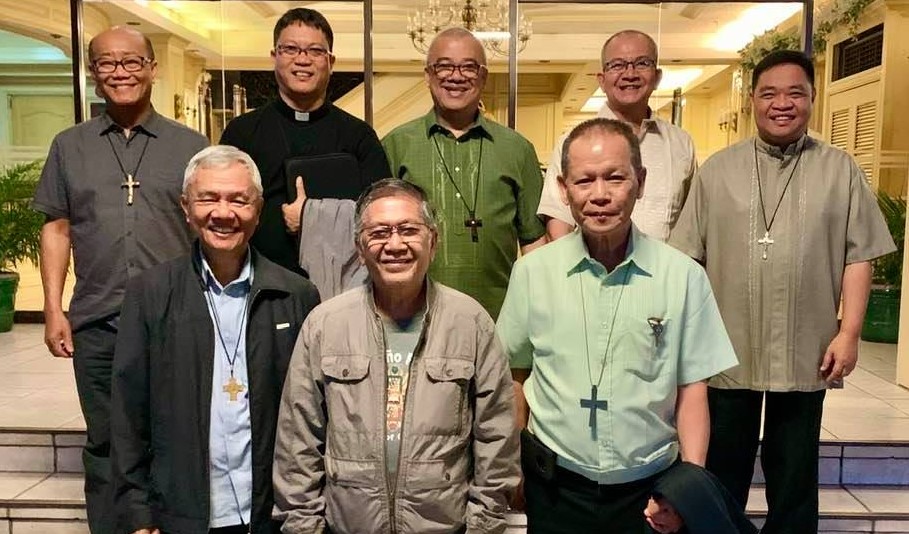 Cardinal Jose Advincula of Capiz and seven prelates in Western Visayas and Romblon denounced the killing of nine leaders and members of the indigenous peoples in Panay during the police operations on December 30 in Iloilo and Capiz provinces.

In a pastoral letter dated January 15, they said: “We, the bishops of Western Visayas, share the griefs and anxieties of our brothers and sisters of the Tumandok tribe in Tapaz, Capiz. We grieve with the families of the nine Tumandok tribespeople who were killed.”

They added, “We share the sufferings of those arrested and of their families. We empathize with the fear and insecurities of those displaced by the atrocities. And we condemn in the strongest possible term, all the killings and especially, the killings of our brothers – the tumandok.”

The pastoral letter, which they mandated to be read in all the masses in all the churches of Western Visayas on January 24, was signed by Advincula, Jaro Archbishop Jose Romeo Lazo, and Bishops Patricio Buzon of Bacolod, Gerardo Alminaza of San Carlos, Louie Galbines of Kabankalan, Jose Corazon Tala-oc of Kalibo, Marvyn Maceda of San Jose de Antique, and Narciso Abellana of Romblon.

They demanded a thorough investigation by an independent body to ascertain what really happened last December 30; that once again we – government, the church, the business community – listen to the legitimate cries of the Tumandoks against the construction of the Jalaur Mega Dam; that the militarization of the IP communities should stop immediately so that the Tumandoks can go home and live in peace again;

That the Philippine National Police and the Armed Forces of the Philippines follow conscientiously the ethical standards in the rules of engagement in their police or military operations; and that police officers be required to use body cameras in all police operations to protect the police against false accusations, as well as protect the civilians from the use of violence or abuse of power such as planting of evidence, illegal arrest and even killings.

“We call on everyone to be highly vigilant in defending the sacredness of life and in respecting and protecting the rights of all,” they said.

They also encouraged the Ilonggo community to reach out in compassion to our bereaved and displaced Tumandok brothers and sisters.

During the operations, nine died, including barangay officials, and 10 were arrested in Tapaz, while seven suspects were nabbed in Calinog, Iloilo province.

The fatalities and those who were arrested were said to be leaders and members of the IP belonging to the Panay Tumandok, but the police maintained that the operations were due to the reports that the said personalities were armed.

The families of those killed disputed the claims of the state forces that they had firearms in their residence and that they resisted arrest.

The incident also caused 300 individuals to flee their homes in Barangay Lahug, Tapaz town due to fear.

Flosemer Chris Gonzales, chief of the legal cooperation cluster of the Regional Task Force to End Local Communist Armed Conflict (RTF-ELCAC), in reaction to the pastoral letter, said the bishops need to see the truth from the perspective of an unbiased mind.

“We caution the bishops from making hasty, false, and presumptuous conclusions. We would like to think that you have all been misinformed. As Catholics, we adhere to the teachings of the Church but that does not equally mean that our Bishops are not prone to errors in judgment,” he said.

He stressed that the arrested individuals were subjects of legitimately issued search warrants, and that they cannot simply conclude that atrocities were committed since that is “simply irresponsible.”

He stressed that the Tumandoks have long been victims of atrocities by the New People’s Army (NPA).

He also asked the prelates why they were silent when the NPA murders soldiers, policemen, and civilians, “the truth is, your silence is deafening,” he said.

He added, “We also request for prudence and objectivity lest you will fall victims to the deceptive propaganda campaign” of the NPA.

The National Commission on Indigenous Peoples stressed that the Tumandok group in Panay is not part of the indigenous communities in the region.

Agosto Maglungsod, NCIP Region 6 and 7 director, in a notice to the public dated January 13, said that Tumandok was “not one of the indigenous cultural communities validated and recognized by NCIP Regions 6 and 7.”

He added that the group has “not been issued by this office a Certificate of Registration as an Indigenous People’s Organization under NCIP Administrative Order No. 2 Series of 2012.”

“Generally, it does not represent any of the indigenous cultural communities in the region nor the Panay-Bukidnon Indigenous Cultural Communities in Tapaz, Capiz and Calinog, Iloilo,” he added.

The Panay Indigenous Culture Advocacy Group (PICAG), composed of IP professionals, academic scholars, researchers, and cultural workers, had called for peace in the region following the police operations that led to the killing and arrest of tribal leaders

They also raised concern over the incident and its impact on the IPs in central Panay.

“The residents of our research sites and the communities where we have conducted knowledge-building since the late 1980s have become concerned with their safety and well-being. The loss of a maaram (learned) culture bearer is irreplaceable,” they said in an earlier statement.

Their communities have made Panay a repository of rich traditional culture, which is unequaled in other parts of the world, the group said. Among these are sugidanon or epics of Panay, and binanog dancing and panubok or indigenous embroidery, the group added.*