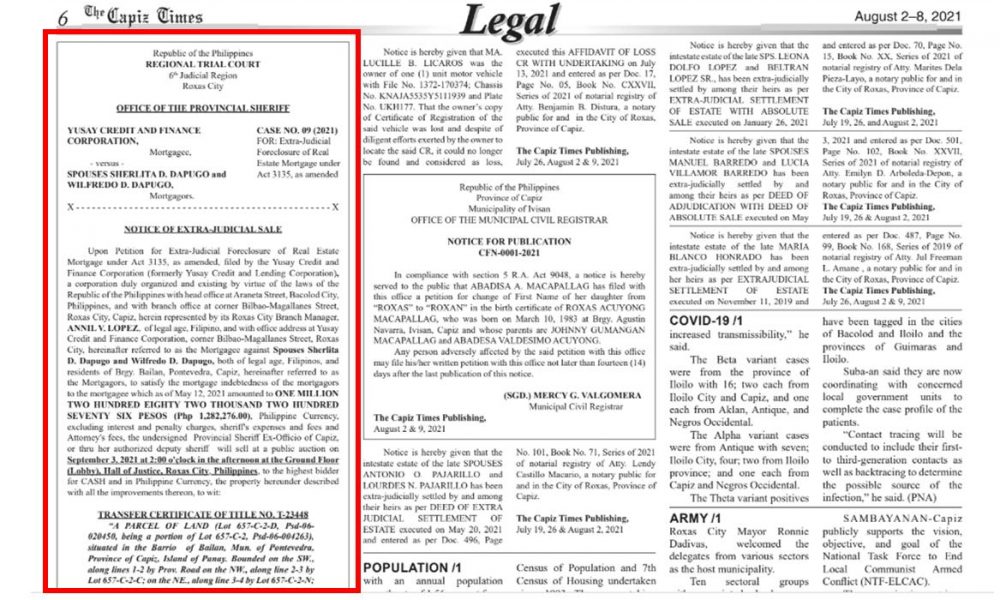 OFFICE OF THE PROVINCIAL SHERIFF

Upon Petition for Extra-Judicial Foreclosure of Real Estate Mortgage under Act 3135, as amended, fi led by the Yusay Credit and Finance Corporation (formerly Yusay Credit and Lending Corporation), a corporation duly organized and existing by virtue of the laws of the Republic of the Philippines with head office at Araneta Street, Bacolod City, Philippines, and with branch offi ce at corner Bilbao-Magallanes Street, Roxas City, Capiz, herein represented by its Roxas City Branch Manager, ANNIL V. LOPEZ, of legal age, Filipino, and with offi ce address at Yusay Credit and Finance Corporation, corner Bilbao-Magallanes Street, Roxas City, hereinafter referred to as the Mortgagee against Spouses Sherlita D. Dapugo and Wilfredo D. Dapugo, both of legal age, Filipinos, and residents of Brgy. Bailan, Pontevedra, Capiz, hereinafter referred to as the Mortgagors, to satisfy the mortgage indebtedness of the mortgagors to the mortgagee which as of May 12, 2021 amounted to ONE MILLION TWO HUNDRED EIGHTY TWO THOUSAND TWO HUNDRED SEVENTY SIX PESOS (Php 1,282,276.00), Philippine Currency, excluding interest and penalty charges, sheriff ‘s expenses and fees and Attorney’s fees, the undersigned Provincial Sheriff Ex-Officio of Capiz, or thru her authorized deputy sheriff will sell at a public auction on September 3, 2021 at 2:00 o’çlock in the afternoon at the Ground Floor
(Lobby), Hall of Justice, Roxas City, Philippines, to the highest bidder for CASH and in Philippine Currency, the property hereunder described with all the improvements thereon, to wit:

TRANSFER CERTIFICATE OF TITLE NO. T-23448

“All sealed bids must be submitted to the undersigned on the above-stated date and time.”

“In the event the above-stated public auction date is declared a holiday, or in case of fortuitous event such as typhoon, flood, or other unforeseen event beyond the control of the officer conducting the sale, it shall be held on October 1, 2021, at 2:00 o’çlock in the afternoon at the Ground Floor (Lobby), Hall of Justice, Roxas City without further notice
and re-publication.”

Prospective buyers may investigate for themselves the title of herein above-described property and the encumbrances thereon, if any there be. Roxas City, Philippines, July 22, 2021.

NOTE: “Bids submitted must be accompanied with Cash or Certified Manager’s Check except the Mortgagee.”

“IT IS STRICTLY PROHIBITED TO DEFACE, REMOVE OR DESTROY THIS NOTICE OF PUBLIC AUCTION SALE ON OR
BEFORE THE DATE OF SALE, UNDER PENALTY OF LAW.”