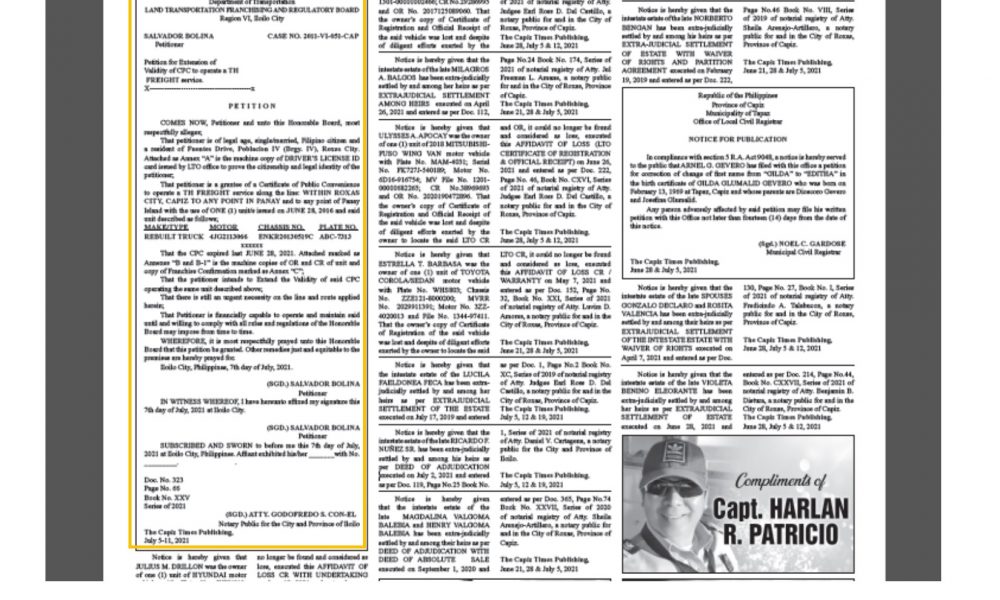 Petition for Extension of CASE NO. 2011-VI-051-CAP
Validity of CPC to operate a TH
FREIGHT service.

SALVADOR BOLINA
Petitioner,
X——————————————x
P E T I T I O N
COMES NOW, Petitioner and unto this Honorable Board, most respectfully alleges;

That petitioner is of legal age, single/married, Filipino citizen and a resident of Fuentes Drive, Poblacion IV (Brgy. IV), Roxas City. Attached as Annex “A” is the machine copy of DRIVER’S LICENSE ID card issued by LTO office to prove the citizenship and legal identity of the petitioner;

That petitioner is a grantee of a Certificate of Public Convenience to operate a TH FREIGHT service along the line: WITHIN ROXAS CITY, CAPIZ TO ANY POINT IN PANAY and to any point of Panay Island with the use of ONE (1) unit/s issued on JUNE 28, 2016 and said unit described as follows;

That the CPC expired last JUNE 28, 2021. Attached marked as Annexes “B and B-1” is the machine copies of OR and CR of unit and copy of Franchise Confi rmation marked as Annex “C”;

That the petitioner intends to Extend the Validity of said CPC operating the same unit described above;

That there is still an urgent necessity on the line and route applied herein;

That Petitioner is financially capable to operate and maintain said until and willing to comply with all rules and regulations of the Honorable Board may impose from time to time.

WHEREFORE, it is most respectfully prayed unto this Honorable Board that this petition be granted. Other remedies just and equitable to the premises are hereby prayed for.

IN WITNESS WHEREOF, I have hereunto affixed my signature this 7th day of July, 2021 at Iloilo City.

SUBSCRIBED AND SWORN to before me this 7th day of July, 2021 at Iloilo City, Philippines. Affi ant exhibited his/her _with No. ___. .