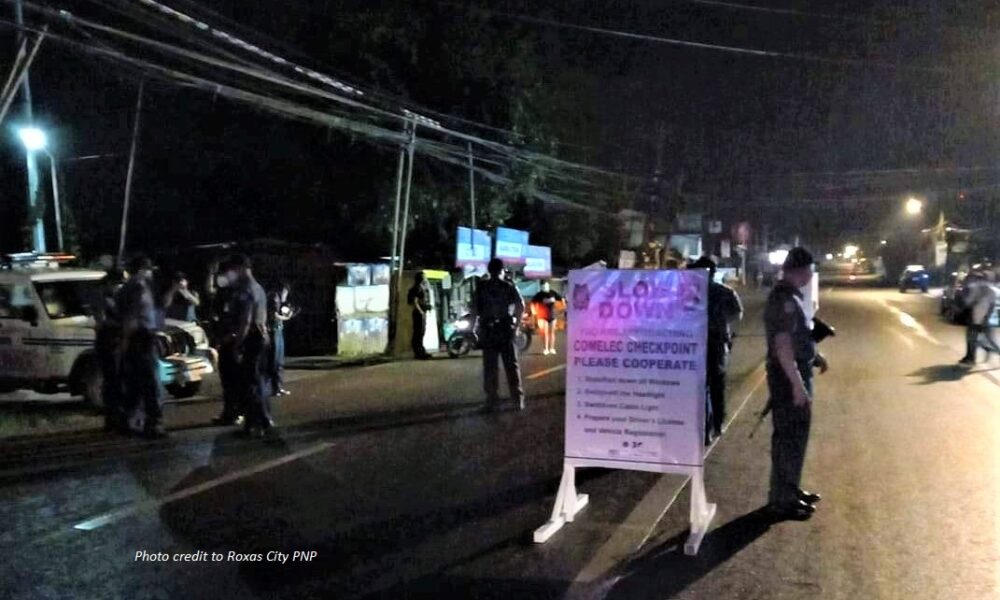 The Commission on Elections (COMELEC) checkpoints are up in Capiz to strictly implement the 150-day gun ban at the start of the election period on January 9.

“Everything went well as this was carefully planned together with the COMELEC. Poll officers and other representatives were at the checkpoints to supervise the first day of implementation and they were satisfied with the smooth flow of the inspection process,” Philippine National Police (PNP) chief General Dionardo Carlos said.

Carlos gives credit to the police units that strategically deployed and oriented their personnel of the guidelines they must familiarize themselves with.

Under the COMELEC resolution, checkpoints must have properly labeled signage to notify the motorists of the checkpoint. It must bear the name of the chief of police in the area. This should be positioned in a well-lit location that will not hamper the smooth flow of traffic and regular activities.

The police officers must also wear the prescribed uniform while conducting the checkpoint operations.

The public is reminded that they are not compelled to go out of their vehicles for a physical check because the inspection is meant to proceed only through visual search.

“They will not be required to open their glove compartment, trunk and bags,” Carlos said.

In case that there is defiance of suspected motorists—a reasonable ground to believe that a person has just committed or is about to commit a crime—the PNP personnel will be made to usher further search.

“Overall, no major untoward incident was recorded nationwide. We received full cooperation from the public which is a good start for us since the election period will last until June 8,” Carlos said.

Carlos admits that the checkpoints may pose some inconvenience for the motorists but this is a strategy to deter those who would attempt to carry and transport firearms while the gun ban is in effect nationwide.

Generally, civilians are prohibited from bringing their firearms outside, except for those who have secured their valid Certificate of Authority from the COMELEC Committee on Ban on Firearms and Security Concerns.*