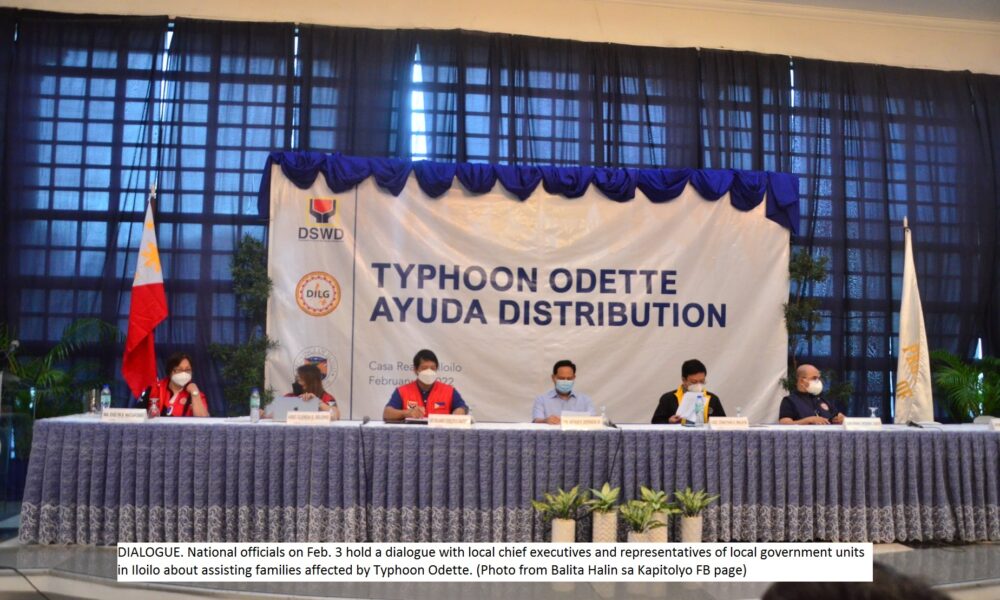 The Department of Social Welfare and Development (DSWD) will assist individuals affected by Typhoon Odette but whose names were not included in the first three financial aid downloaded by the Department of Budget and Management (DBM) last December.

This was explained by DSWD Assistant Secretary Glenda Relova during the dialogue on Feb. 4 with Iloilo mayors and their representatives on the provision of assistance held at the Casa Real in Iloilo City.

“Our reckoning period is all data after Dec. 28 and ends on Jan. 5. For those who have not submitted their data, please coordinate with the DSWD field office,” she said.

The DSWD through its assistance to individuals in crisis situation can provide up to a maximum of PHP5,000.

DSWD Western Visayas Regional Director Ma. Evelyn B. Macapobre said they have information that their request (for assistance for those whose names were first excluded) has already been approved and they will soon be coordinating with LGUs for the schedule of the payout.

To recall, the DBM downloaded funds to local government units (LGUs) on Dec. 23 and 26 as mandated under the Local Budget Circular (LBC) 140 to augment the local disaster risk reduction and management fund (LDRRMF).

The funds can be used for disaster response, disaster recovery, and the purchase of disaster equipment.

In some areas, Relova said LGUs opted to assist their constituents with totally and partially damaged houses.

Another fund was downloaded on Dec. 29 as mandated under LBC 141 and committed by President Rodrigo Duterte as financial assistance to low-income, severely affected individuals.

“When we say severely affected, they were present during the typhoon,” she said. The amount to be given is PHP1,000 per individual or a maximum of PHP5,000 per family.

Relova reminded LGUs that those who received assistance from the NHA could no longer receive aid from the LBC 140 and LBC 141 or the DSWD.

The dialogue was also joined by DSWD Secretary Rolando Bautista, Undersecretary Jonathan Malaya of the Department of the Interior and Local Government, and Iloilo Governor Arthur Defensor Jr. (PNA)