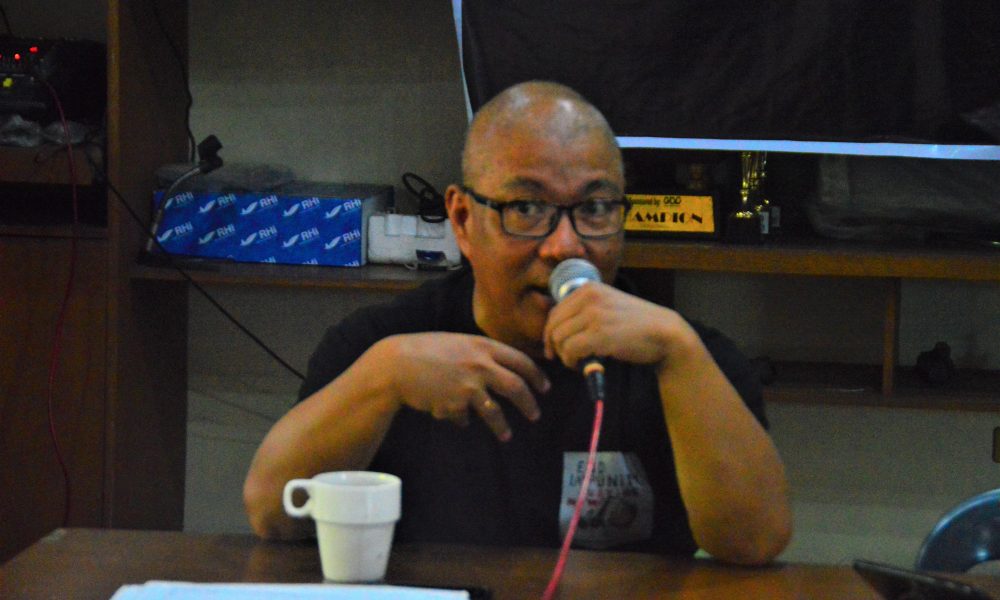 As Filipino journalists all over the country mourn the passing of fellow newsman Nonoy Espina, his family informed the National Union of Journalists of the Philippines (NUJP) on July 8 that they wish to channel all “abuloy” or donations for his funeral to a health and welfare fund for journalists and media workers.

Nonoy, former NUJP chairperson, died of liver cancer on July 7 in his hometown in Bacolod City.

“We know so many colleagues live under precarious economic conditions, with no tenure and often, with little social benefits,” Nonoy’s sister, Inday Espina-Varona, said in a Facebook post.

According to a March 2021 survey conducted by NUJP, 15 percent of the more than 200 journalists polled nationwide receive a measly salary of P5,000 and below per month, while 19 percent have a monthly salary ranging from P5,000-P10,000.

The pandemic has further exposed the economic vulnerabilities of journalists and media workers, with many unable to afford medical treatment when they get sick.

The NUJP Board of Directors warmly accepted the Espina family’s offer, knowing that Nonoy would have wished that too. He had always been caring and compassionate with fellow media workers, especially those struggling in the communities, it said in a statement.

In fact, when NUJP organized a fundraiser last month, Nonoy did not want it to be for him alone, saying that other colleagues are also in need, it added.

On Thursday, July 8, the NUJP formally announced the Nonoy Espina Emergency Fund for Media Workers in honor of its former chairperson.

NUJP will announce the guidelines for the fund in the coming days.

Espina was described by NUJP as a tireless champion for the freedom of the press and the welfare of media workers.

“He was a press freedom hero worthy of admiration and emulation. From the Marcos dictatorship until the Duterte administration, he consistently served the Filipino people by upholding the truth.

Nonoy was among the loudest voices at rallies in support of the renewal of ABS-CBN’s franchise, leading a march in Quezon City in March 2020 and later joining similar activities in Bacolod City, where he was based,” NUJP said.

Espina was also among the first responders at the Ampatuan Massacre in Maguindanao in 2009. He was vocal in the campaign for justice for the victims, which included 32 media workers, and was present at commemorations and in activities leading up to the verdict in 2019.
Despite this partial victory, he was among those pushing for the recognition of Reynaldo Momay as among the 58 victims of the massacre.

“While he was quick to curse those who trample upon press freedom and human rights, Nonoy was always compassionate with colleagues, especially in the provinces. As a peer supporter, he would always take time to listen, was never judgemental and always understanding,” the group said.

Espina, who was a former senior editor for news website InterAksyon, advocated for better working conditions for media despite himself being laid off from the website, a move that he and other former members of the staff questioned before the National Labor Relations Commission.

They won that fight and Nonoy has led many other journalists to join the bigger fight for a more independent and freer press.

A journalist since high school, he was later an editor of Pagbutlak, the official student publication of UP Visayas in Iloilo City.

He was later part of community media group Correspondents, Broadcasters and Reporters Association—Action News Service, or COBRA-ANS, which was part of the “mosquito press” during the Marcos dictatorship.

The College Editors Guild of the Philippines honored Nonoy with the Marcelo H. Del Pilar Award, the highest honor that the organization gives its alumni.

In its citation, CEGP called Nonoy “without doubt, a leading force in the defense of press freedom and freedom of expression in the country today.”

NUJP thanks him for his long years of service to the union and the profession and promises to honor him by protecting that prestige.

“Nonoy leaves us with lessons and fond memories, as well as the words he often used in statements: That the press is not free because it is allowed to be. It is free because it insists on being free,” it said.*