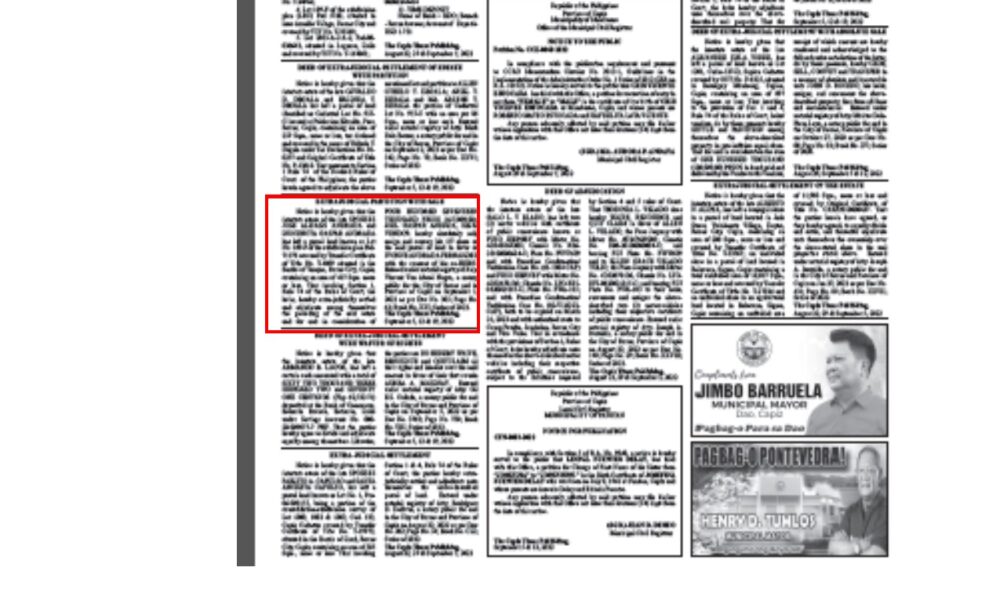 Notice is hereby given that the intestate estate of the late SPOUSES JOSE ALISASIS ANDRADA and
INOCENCTA GASPAR ANDRADA has left a parcel land known as Lot No. 169-F of the subdivision plan Psd-71176 covered by Transfer Certificate of Title No. T-4099 situated in the Barrio of Tanque, Roxas City, Capiz, containing an area of 417 Sqm. more or less. That invoking Section 1, Rule 74 of the Rules of Court, the heirs, hereby extra-judicially settled and adjudicate among themselves the preceding of the said estate and for and in consideration of FOUR HUNDRED SEVENTEEN THOUSAND PESOS (417,000.00),
JOEL GASPAR ANDRDA, HEIR/VENDOR hereby absolutely sell, assign and convey his 1/7 share of
the said parcel of land in favor of IVONNE ANDRADA FERNANDEZ with the consent of his co-HEIRS.
Entered under notarial registry of Atty. Vincent Von Abool Nogra, a notary public for the City of Roxas and in Province of Capiz on September 1, 2022 as per Doc No. 305; Page No. 62; Book No. XXI; Series of 2022.