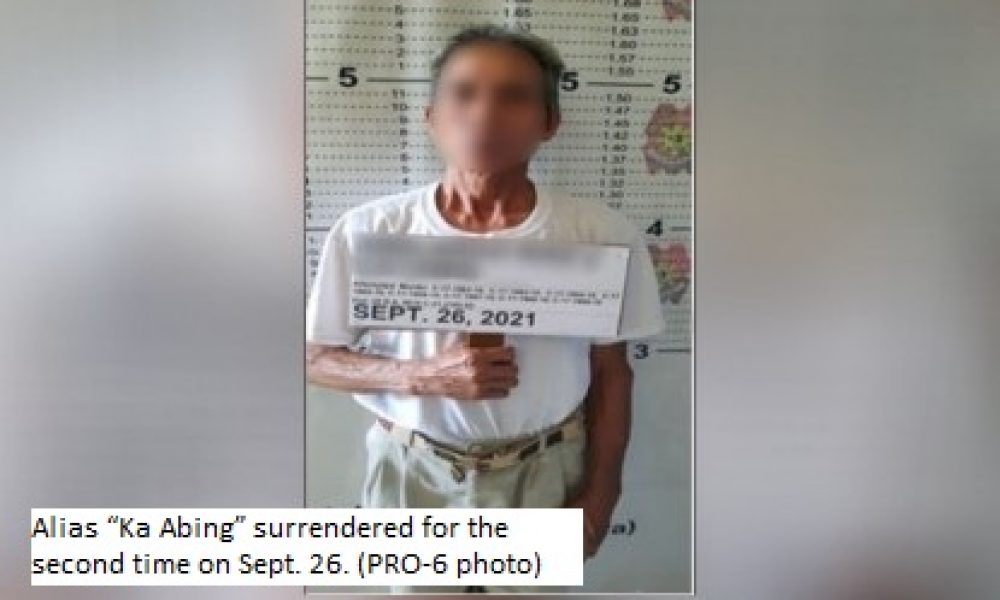 A 59-year-old member and cook of the Communist Party of the Philippines – New People’s Army (CPP-NPA) surrendered to authorities for the second time on September 26 after he was convinced by military and village officials of Barangay Tacayan in Tapaz, Capiz.

Alias “Ka Abing” was persuaded to surrender due to his age and the hardships he has experienced in the movement, said Police Regional Office (PRO) 6 (Western Visayas) spokesperson, Lt. Col. Arnel Solis, in an interview.

Last month, Abing sought permission from his commander to have a vacation, which he grabbed as an opportunity to escape.

He surrendered to the Philippine Army’s 12th Infantry Battalion headquarters in Camp Carreon in Calinog, Iloilo.

Abing is listed in the Philippine National Police’s periodic status report (PSR) as a member of Squad 2, Platoon 2, Front 14 of the Komiteng Rehiyon Panay (KR-P).

Solis said Abing was first recruited by Kumander Alano and Bob Giganto into the movement sometime in July 1986 and served as a semi-legal team lecturer on land reform for five years.

However, Abing was among the subjects of the search warrants implemented during simultaneous law enforcement operations on Dec. 20, 2020 but he was not home.

“Probably due to fear, he returned to the underground movement. He was recruited by Gaspas Matullano alias Ka Mayok/Glu,” Solis said.

On Jan. 5, 2021, Abing returned to the movement where he served as a cook for Front 14, until his surrender on September 26.

During his recent surrender, he yielded a .45 caliber Colt pistol, one magazine, and five pieces of ammunition for a .45 caliber gun.

Solis, however, said upon assessment, Abing was found to have standing warrants of arrest.

“He is a CTG (communist terrorist group) member because he is in our PSR. We arrested him because upon checking, it was known that he has existing warrants of arrest,” he said.

Abing faces eight counts of attempted murder and violation of Republic Act (RA) 9516 or the Unlawful Possession of Explosives for his participation in an ambush incident at the Lugtuga Creek in Barangay Nayawan, Tapaz on Oct. 7, 2013 that injured an operative of the 61st Infantry Battalion.

“For now, we could not say if he could avail of benefits due to his existing warrants. But what we know is that the trial for his cases will continue,” Solis added.

Abing, who was already presented to the courts that issued the warrants, is now in the custody of the Tapaz Municipal Police.

The court has fixed the bail for his attempted murder cases at PHP120,000 each while no bail was recommended for the violation of RA 9516.

The CPP-NPA is listed as a terrorist organization by the United States, the European Union, the United Kingdom, Australia, Canada, New Zealand, and the Philippines. (PNA)