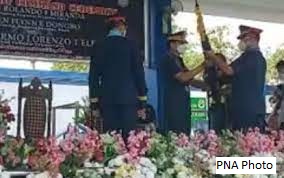 Brig. Gen. Flynn Dongbo took over the helm as the new director of the Police Regional Office in Western Visayas (PRO-6) succeeding Brig. Gen. Rolando  Miranda who bowed out of service on Nov. 10.

The ceremony was presided by Philippine National Police (PNP) Chief, Gen. Guillermo Lorenzo T. Eleazar, who also expressed his gratitude to the men and women of PRO6 as he will also be retiring.

In his message, he reminded the men and women of the PNP of the high expectations of the public.

He said that policies have been modified to adjust and adapt to the prevailing situation.

What is needed is the proper and strict implementation “with the effective supervision from all levels of command,” he added.

Eleazar also pinned his hope for Dongbo to be able to help realize the mission of ensuring peaceful, credible, and honest elections next year.

Dongbo, who served as a former director and deputy director of Integrity Monitoring and Enforcement Group (IMEG) and Directorate for Investigation and Detective Management (DIDM), before his assumption as PRO6 top cop assured that they will remain apolitical and will continue to protect the electorate to achieve honest, orderly and peaceful elections.

He laid down his plans that will include sustained implementation of aggressive and intensified internal cleansing, ensuring the execution of the highest standard of professionalism, providing equal opportunity for the capacity-building and career enhancement of personnel, and continued strengthening of partnership with community and stakeholders.

“Under my watch, we will continue our fight against criminality, insurgency, and illegal drugs in coordination with other law enforcement agencies and the Armed Forces of the Philippines. The law mandates us to stand on guard 24 hours a day to look after people, save lives and protect the vulnerable,” he said.

Dongbo expressed his gratitude to his predecessor for the leadership he provided in the region.

“I then commit that under my watch we will work side by side with other agencies and counterparts to fulfill the marching order of our commander-in-chief. We will continue our chief PNP’s intensified cleanliness policy that is to ensure cleanliness in police stations, ranks and community,” he said in his message. (PNA)