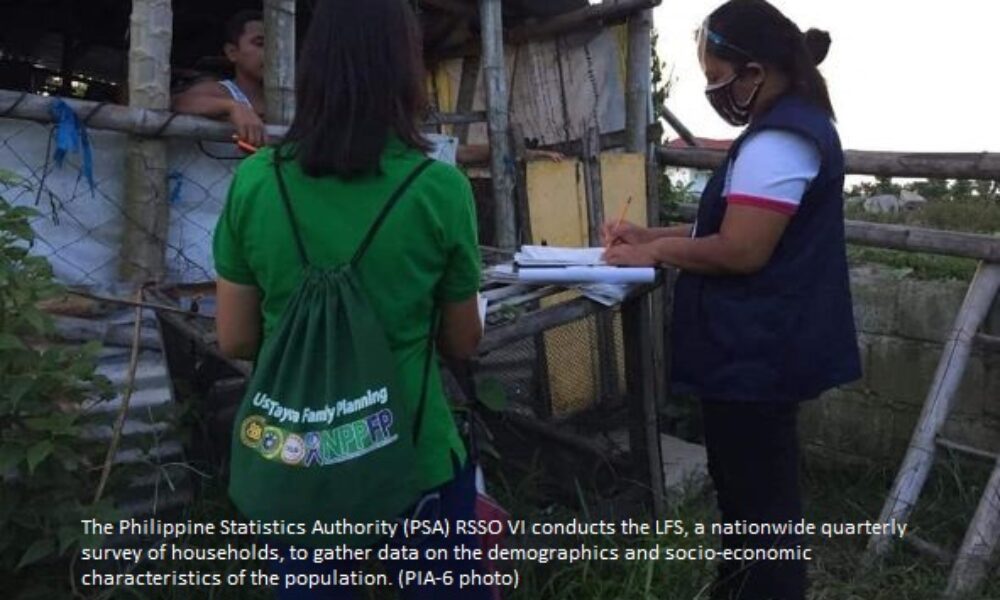 A total of 11, 769 households will take part in the January 2022 Labor Force Survey (LFS) and 2021 Family Income and Expenditure Survey (FIES) Visit 2 which commenced on January 10 in the different provinces and highly urbanized cities  in Western Visayas.

The Philippine Statistics Authority (PSA) RSSO VI conducts the LFS, a nationwide quarterly survey of households, to gather data on the demographics and socio-economic characteristics of the population.

The Philippine Statistics Authority (PSA) RSSO VI conducts the LFS, a nationwide quarterly survey of households, to gather data on the demographics and socio-economic characteristics of the population.

LFS provides information as a basis for the formulation of policies and programs on the creation and generation of gainful employment and livelihood opportunities, reduction of employment and underemployment, and enhancement of the welfare of a working person.

On the other hand, the FIES is a survey on family income and expenditure of households.  It is the basic source of information for the estimation of the household account in the System of National Accounts and balances; measurement of poverty and Human Development Index (HDI); and levels of living of different sections of the population, and disparities in levels of living across geographical regions and socio-economic groups.

The 2021 FIES Second Visit will interview the same households in July 2022, on their income and expenditures for July to December 2021 period. Personal interviews will be conducted using tablets through the Computer-Assisted Personal Interviewing (CAPI) application.

PSA RSSO VI is again soliciting public support and cooperation in the conduct of the said activities.

It also assured that all the collected data will be held strictly confidential  in compliance with the Data Privacy Act of 2012.  (PIA6-Iloilo)