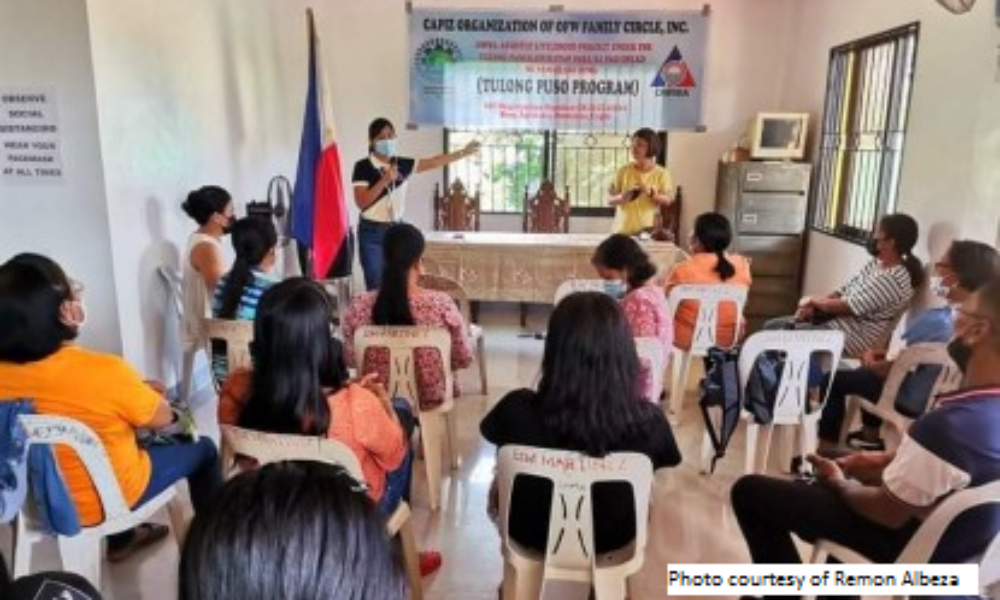 A federation of former overseas Filipino workers (OFWs) who have decided to stay for good in the country, is the first recipient of aid under the Tulong Pangkabuhayan sa Pag-unlad ng Samahang OFWs (Tulong Puso) program of the Overseas Workers Welfare Administration (OWWA) in Western Visayas.

“Tulong Puso is part of our reintegration project. The purpose is to grant financial assistance to organized OFW family circles who wish to elevate their way of living by entering into business ventures,” Moldes said in an interview.

The one-time financial assistance is a relatively new program that was implemented only last year, she added.

“They can use the financial assistance to purchase raw materials, tools, and equipment if start-up. But if they are already existing, they can use it either as additional working capital for expansion or enhance their current livelihood project,” Moldes added.

The OFW federation, with 54 members, is based in Barangay Aglalana in Dumarao, Capiz but the members are from various municipalities of the province, who are either leaders or members of OFW family circles in their area.

The third tranche, or the remaining 30 percent, will be released when they submit proof of business physical set-up, and documentation and summary of the disbursement of the first two tranches.

Those interested have to submit their business proposal, which will be evaluated by the DTI, based on its viability and success rate.

It is open to organized OFWs, recognized either by the Cooperative Development Authority, Securities and Exchange Commission, or the Department of Labor and Employment.

To ensure its success, the proponent organization has to provide a 20 percent equity of the total project cost.

“We expect that our livelihood grant will be sustained by the organization because it can help in their daily need(s),” Moldes added.

The turnover of the check, held at the gymnasium of Barangay Guintas in Sigma town, was led by OWWA-6 Programs and Services Division chief, Sarah P. Togonon. (PNA)