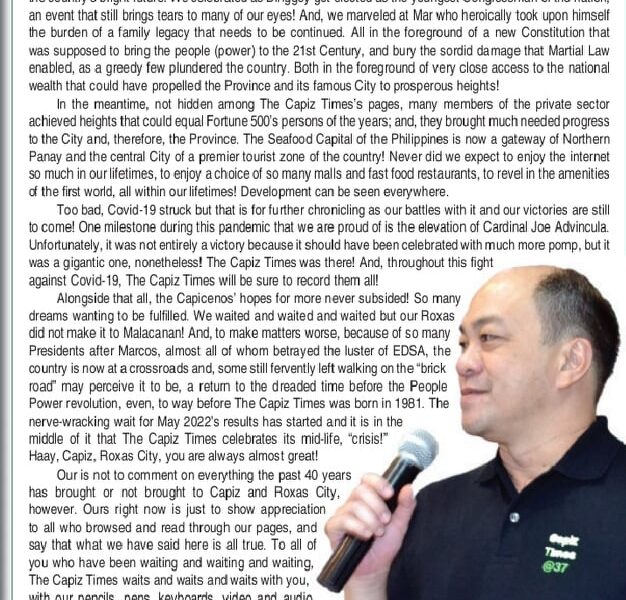 40 years! They went by just like that! And, we are still here, the Voice of the Capiceno!

What started as a pilot balloon of freedom in the midst of a dictator’s rule has gone on to live to see that dictator toppled and chronicle the aftermath, all 35 years of it! What can we possibly show for it? Plenty! . . . And, not much.

We recorded the return of the Roxases to Capiz at about the time that the Aquinos took the cudgels for the country’s bright future! We celebrated as Dinggoy got elected as the youngest Congressman of the nation, an event that still brings tears to many of our eyes! And, we marveled at Mar who heroically took upon himself the burden of a family legacy that needs to be continued. All in the foreground of a new Constitution that was supposed to bring the people (power) to the 21st Century, and bury the sordid damage that Martial Law enabled, as a greedy few plundered the country. Both in the foreground of very close access to the national wealth that could have propelled the Province and its famous City to prosperous heights!

In the meantime, not hidden among The Capiz Times’s pages, many members of the private sector achieved heights that could equal Fortune 500’s persons of the years; and, they brought much needed progress to the City and, therefore, the Province. The Seafood Capital of the Philippines is now a gateway of Northern Panay and the central City of a premier tourist zone of the country! Never did we expect to enjoy the internet so much in our lifetimes, to enjoy a choice of so many malls and fast food restaurants, to revel in the amenities of the first world, all within our lifetimes! Development can be seen everywhere. Too bad, Covid 19 struck but that is for further chronicling as our battles with it and our victories are still to come and The Capiz Times will be sure to record them all!

Alongside that all, the Capicenos’ hopes for more never subsided! So many dreams wanting to be fulfilled. We waited and waited and waited but our Roxas did not make it to Malacanan! And, to make matters worse, because of so many Presidents after Marcos, almost all of whom betrayed the luster of EDSA, the country is now at a crossroads and, some still fervently left walking on the “brick road” may perceive it to be, a return to the dreaded time before the People Power revolution, even, to way before The Capiz Times was born in 1981.

The nerve-wracking wait for May 2022’s results has started and it is in the middle of it that The Capiz Times celebrates its mid-life, “crisis!” Haay, Capiz, Roxas City, you are always almost great!

Our is not to comment on everything the past 40 years has brought or not brought to Capiz and Roxas City, however. Ours right now is just to show appreciation to all who browsed and read through our pages, and say that what we have said here is all true.

The Capiz Times, congratulations! Here’s to 35 + 5 years of waiting and waiting and waiting! And, telling Capiz stories! We shall continue to chronicle your voice whether that waiting becomes worth it aplenty or even if it harvests still not much!*