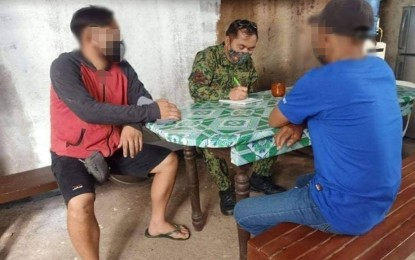 Two alleged supporters of the New People’s Army in Capiz have recently surrendered to the government forces at Dumarao Municipal Police Station.

According to Lt. Col. Joem Malong, Police Regional Office-6 public information officer, “Ka Fidel” became an active supporter of the NPA in 1992 but became inactive after the death of Remy Beraye during the encounter at Brgy. San Antonio, Cuartero, Capiz on Nov 17, 2017.

After 29 years, “Ka Fidel” decided to disband from the group to live a normal and fearless life, thus, motivated him to surrender to the government to clear his name, Malong said.

“Ka Kano” was recruited by “Ka Val” and “Ka Bong” in 2011 but left the group after a year. He served as a security man in their team when they collect revolutionary tax from the populace, she said.

The surrenderers can avail of the government’s Enhanced Comprehensive Local Interrogation Program because of their surrender.*Capiz Police Provincial Office photo