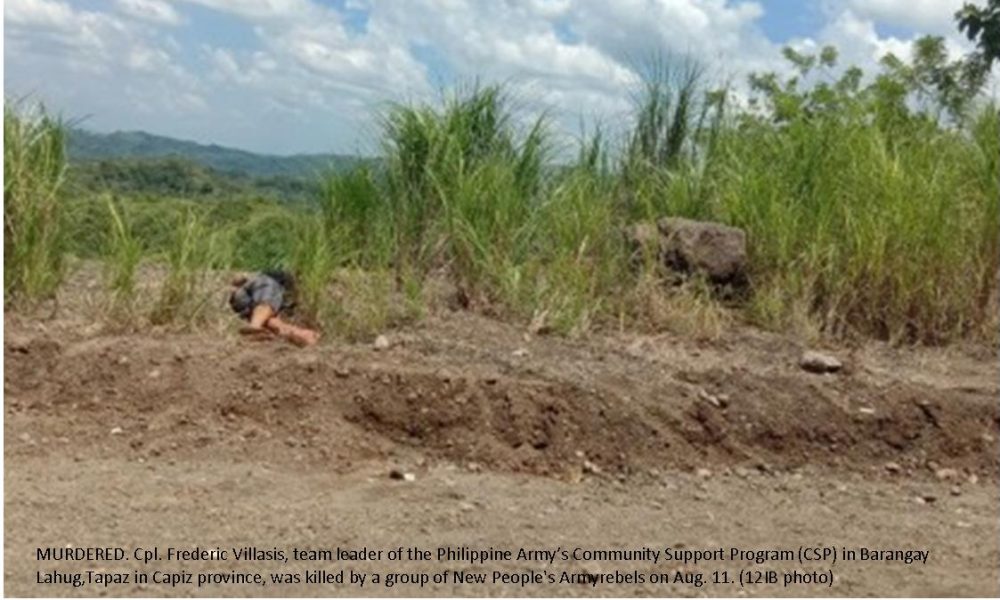 SUSPECTED New People’s Army rebels on August 11 snatched and killed a leader of the Philippine Army’s (PA) Community Support Program (CSP) Sustainment Team in Barangay Lahug in the municipality of Tapaz in Capiz while on his way to follow up on development projects for the village.

Cpl. Frederic Villasis of the 12th Infantry Battalion (12IB) and Lahug councilors Analyn Giganto and Estong Sumaria were on board two motorcycles when they were cut off by a group of rebels in Sitio Owa of the said barangay.

The three were on their way to the municipal hall to follow up on a water system and other development projects. Maj. Cenon Pancito III, spokesperson of the PA’s 3rd Infantry Division (3ID) said that based on the information gathered from the locals, around 40 rebels were scattered in groups in the area.

The rebels singled out Villasis as his hands were tied and then was shot three times at the back while the two civilians were made to lie down and were later set free, Cenon said.

The CSP in Lahug culminated in March this year but 33-year-old Villasis, a resident of Sigma, Capiz led a Sustainment Team or left-behind force to prevent the NPA from regaining its influence in the barangay.

“The left-behind force ensures that there is no vacuum and prevent the CPP-NPA to regain Lahug, given that the
barangay is within the guerrilla base of the enemy,” Pancito said.

The CSP is the Army’s people-centered program to bring peace and development in conflict-affected barangays and an initiative to bring the government closer to the people through an immediate delivery of basic services.

“This is clearly an act of terror designed to undermine the peace efforts of the government in the hinterland barangays of Tapaz, Capiz. This barbaric and inhumane act will not go unpunished. Those responsible will be held accountable and shall be brought to the bars of justice,” said task force spokesperson Assistant Provincial Prosecutor Flosemer Chris Gonzales, said in a statement.

Gonzales said the rebels have shown that they are “terrorists to the core” and unless and until every member of the armed movement has surrendered or neutralized, peace will be impossible.

The task force also offered its condolences to the victim’s family and assured them that his heroism will not be forgotten.

Brig. Gen. Marion Sison, commander of the 301st Infantry Brigade, in a statement, called on the public to denounce
communist terrorism and condemn the senseless violence.

“Our soldiers are working to give our people a better life, by paving the way for peace and development. His murder is nothing but a cowardly act of desperation by the communist terrorist group who has been continuously losing their mass-based support in the island of Panay,” he said.

Maj. Gen. Eric Vinoya, commander of the 3ID, in a statement, said justice will be sought for the soldier’s death and appropriate criminal charges will be fi led against the culprits.

“While we mourn for the fall of another hero, we shall make sure that what our soldier has started in Lahug, Tapaz will continue until we finally end the local communist armed conflict,” he said.

Villasis left behind his wife and two children.