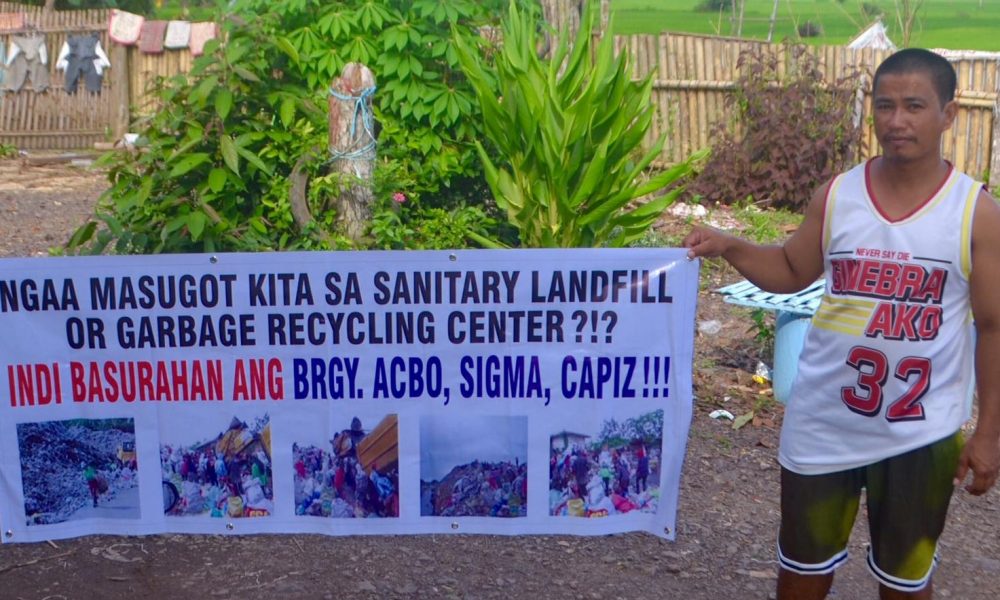 Some residents of Barangay Acbo, Sigma town in Capiz province held a series of protests to express their opposition to the proposed solid waste management facility and eco-park in their locality.

Army Ponsaran Arante, one of the leaders of Tumandok Takon It Sigma (TTIS), said the project site is elevated on the hills of the barangay, adding that 90 percent of the land in the village and its neighboring barangays are rice fields and vegetable plantation.

The water source for crops are deep wells where locals also get their water for drinking and daily usage, Arante said, adding that farmers are worried about the project.

Arante claimed that Capiz Provincial Environment and Natural Resources Office initially presented the proposed project as a sanitary landfill, but failed to call for public consultation.

The project was turned down by the vice mayor for lack of supporting documents.

CaPENRO then called for a consultative assembly where it presented the proposed solid waste management and eco-park project.

For his part, Mayor Christopher Andaya said the resolution made by the Sangguniang Bayan stated that it is just for the purchasing of the lot by the provincial government, and as agreed with the governor, there is no intention of putting up a dumpsite within the area.

It would take another resolution to establish the facility, and that Sigma has the right to refuse, he said.

Andaya said that all towns are already practicing waste segregation.

The mayor said they have no landfill or dumpsite because of their expertise in waste segregation and waste management.

The municipality has been practicing vermiculture, the use of annelid worms for composting, in which the local government is earning an income, he said.

Sigma has been grinding their plastic wastes which are sent to the Villar Foundation in exchange for plastic school chairs made out of plastic wastes, he said.

The mayor said he believes that it is the reason why Sigma was chosen as the site for the said facility.