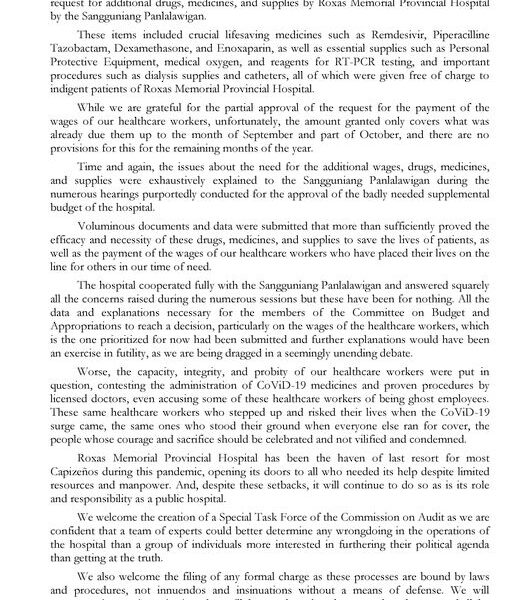 Frontliners of Roxas Memorial Provincial Hospital (RMPH) have expressed dismay after its proposed supplemental budget to cover additional medicines and supplies was denied by members of the Sangguniang Panlalawigan (SP).

In a statement on October 13, the RMPH said:  “Our war against the COVID-19 received a big setback, with the denial of the request for additional drugs, medicines, and supplies by SP.”

These items included crucial lifesaving medicines such as Remdesivir, Piperacillin Tazobactam, Dexamethasone, and Enoxaparin, as well as essential supplies such as personal protective equipment, medical oxygen, and reagents for RT-PCR testing, and important procedures such as dialysis supplies and catheters, all of which were given free of charge to indigent patients of the hospital, the statement said.

“While we are grateful for the partial approval of the request for the payment of the wages of our healthcare workers, unfortunately, the amount granted only covers what was already due them up to the month of September and part of October, and there are no provisions for this for the remaining months of the year,” it stressed.

RMPH emphasized that the issues about the need for the additional wages, drugs, medicines, and supplies were “exhaustively explained” to the members of the August body during the numerous hearings purportedly conducted for the approval of the “badly needed” supplemental budget of the hospital.

“Voluminous documents and data were submitted that more than sufficiently proved the efficacy and necessity of these drugs, medicines, and supplies to save the lives of patients, as well as the payment of the wages of our healthcare workers who have placed their lives on the line for others in our time of need,” they said.

They also said that the hospital “cooperated fully” with SP and “answered squarely” all the concerns raised during the numerous sessions but “these have been for nothing.”

“All the data and explanations necessary for the members of the Committee on Budget and Appropriations to reach a decision, particularly on the wages of the healthcare workers, which is the one prioritized for now had been submitted and further explanations would have been an exercise in futility, as we are being dragged in a seemingly unending debate,” the statement said.

It added, “worse, the capacity, integrity, and probity of our healthcare workers were put in question, contesting the administration of COVID-19 medicines and proven procedures by licensed doctors, even accusing some of these healthcare workers of being ghost employees. These same healthcare workers who stepped up and risked their lives when the COVID-19 surge came, the same ones who stood their ground when everyone else ran for cover, the people whose courage and sacrifice should be celebrated and not vilified and condemned.”

They also welcomed the creation of a Special Task Force of the Commission on Audit as “we are confident that a team of experts could better determine any wrongdoing in the operations of the hospital than a group of individuals more interested in furthering their political agenda than getting at the truth.”

“We also welcome the filing of any formal charge as these processes are bound by laws and procedures, not innuendos and insinuations without a means of defense. We will cooperate in any investigation that will be conducted and ensure that the same shall be transparent and fair,” the statement said.*