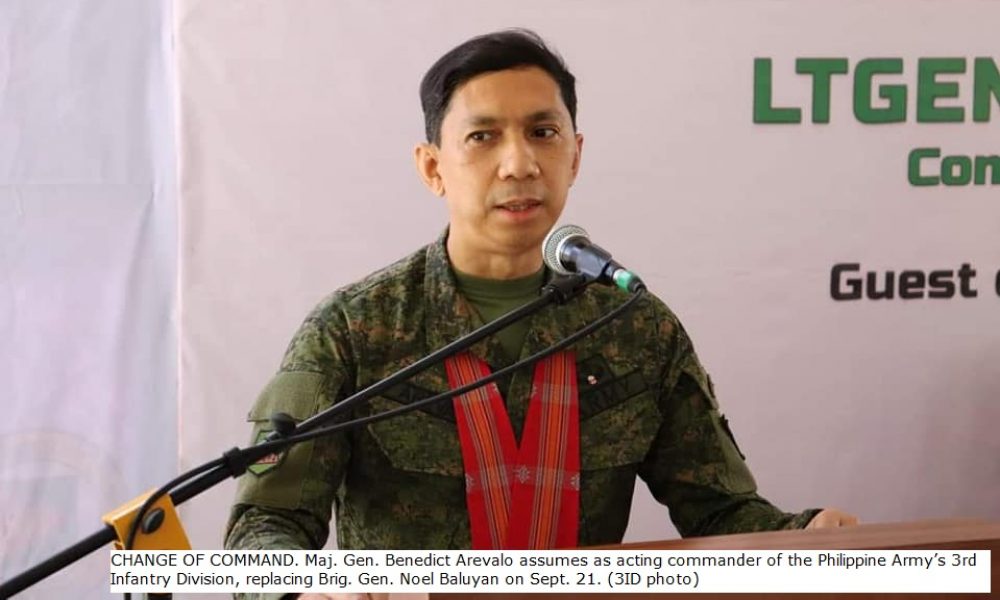 Troops under the Philippine Army’s 3rd Infantry Division (3ID) were told to serve the people using the development programs of the national government but to also be aggressive in the battlefront to be able to put an end to the insurgency.

In his message during the change of command ceremony held at Camp Peralta in Jamindan, Capiz, Army commanding general, Lt. Gen. C. Centino, told the soldiers they have all the time and resources at their disposal because partner-government agencies are already on board as a result of the creation of the National Task Force to End Local Communist Armed Conflict (NTF-ELCAC).

The task force is the government’s response to raise awareness of the ongoing communist rebellion in the country.

“Go where the enemies are by establishing forward operating bases, increase intelligence efforts to improve operational efficiency and instill the culture of discipline among yourselves. Take all these into account in serving the people of Central and Western Visayas because these will give us the edge to win,” he said. “Focus on (the) main task, be mindful of (the) deadline set by the President, which is to defeat insurgency by June 2022.”

In his message, Arevalo said while they would continue to win the hearts and minds of people through their civil-military activities, they would be feared by their enemies through relentless, aggressive, and offensive operations.

“We should not be coward or down-hearted because of the comments of our enemy and the friends and supporters of our enemy. We will continue to negate the lies and deception that our enemy is trying to propagate in our provinces, especially in the far-flung barangays,” he said.

He added that the division must not lag behind other divisions that continue to deliver victories on the battlefield to defeat the Communist Party of the Philippines – New People’s Army (CPP-NPA), which is listed as a terrorist organization by the United States, the European Union, the United Kingdom, Australia, Canada, New Zealand, and the Philippines.

He also urged the people of Western and Central Visayas to support the armed forces.

“It might be difficult but with the trend nationwide, the CPP-NPA actually is collapsing but has not yet collapsed. Hopefully, if we can sustain it, we can really see the time that they are not capable of engaging us in frontal combat operations. With our relentless operations, I’m sure that we will be able to neutralize the threat they are posing not only to us but also to our countrymen,” he said.

Before he was appointed 3ID commander, Arevalo was the Deputy Chief of Staff for Civil-Military Operations (J7) of the Armed Forces of the Philippines. (PNA)