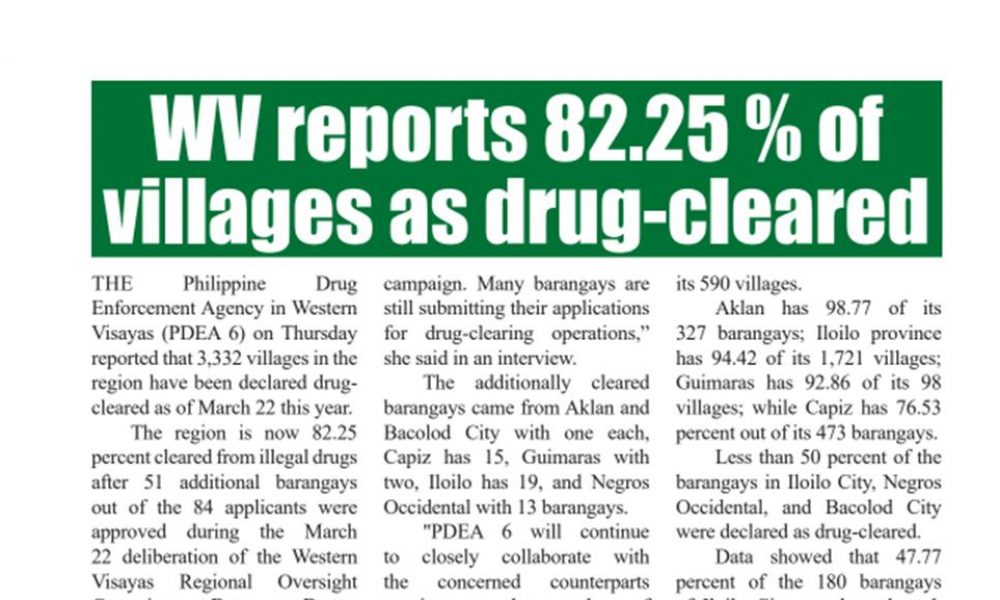 THE Philippine Drug Enforcement Agency in Western Visayas (PDEA 6) on Thursday reported that 3,332 villages in the region have been declared drug-cleared as of March 22 this year.

The region is now 82.25 percent cleared from illegal drugs after 51 additional barangays out of the 84 applicants were approved during the March 22 deliberation of the Western Visayas Regional Oversight Committee on Dangerous Drugs.

Shey Tanaleon, the spokesperson for the PDEA, said that this means that 3,332 out of the 4,051 barangays in the region are no longer drug-aff ected.

“PDEA together with members of the oversight committee continues its mandate to drug-clear barangays despite the pandemic. We can also see that local government units, especially barangays, are still in full support of the anti-drug campaign. Many barangays are still submitting their applications for drug-clearing operations,” she said in an interview.

The additionally cleared barangays came from Aklan and Bacolod City with one each, Capiz has 15, Guimaras with two, Iloilo has 19, and Negros Occidental with 13 barangays. “PDEA 6 will continue to closely collaborate with the concerned counterparts to increase the number of barangays to be cleared through proper implementation of DDB Regulation number 3, series of 2017 and the Omnibus Procedures in Declaring a Drug Affected Barangay as Drug Cleared,” Tanaleon added.

Data provided by the PDEA, which sits as chair of the oversight committee, showed that Antique has the highest percentage of barangays cleared with 99.32 percent or 586 out of its 590 villages.

Less than 50 percent of the barangays in Iloilo City, Negros Occidental, and Bacolod City were declared as drug-cleared.

Tanaleon said local government units where fewer barangays were declared free from illegal drugs have yet to complete their community-based rehabilitation program as well as enroll their drug pusher-surrenderers in Balay Silangan Reformation Facility.

The cities of Iloilo and Bacolod are already in the process of finalizing the requirements for the inauguration of their reformation facilities.

Also, “sightings of drug personalities that need to be WV /1 neutralized by drug enforcement officers” remain.

PDEA is joined in the oversight committee by the Department of the Interior and Local Government, Department of Health, and the Philippine National Police. (PNA)